Groundwater is a major source of water for public supply, irrigation, industry, and power generation. The Coastal Plain covers two-thirds of the State yet contains about 95% of its groundwater resources. It consists of layers of unconsolidated sand, clay, and limestone. Sand and limestone layers are porous and constitute the water-bearing zones called aquifers; clay layers are relatively impervious and constitute the confining units.

This information is used to construct hydrogeologic cross sections and maps depicting the spatial distribution of the principal aquifers and confining units of the Coastal Plain. 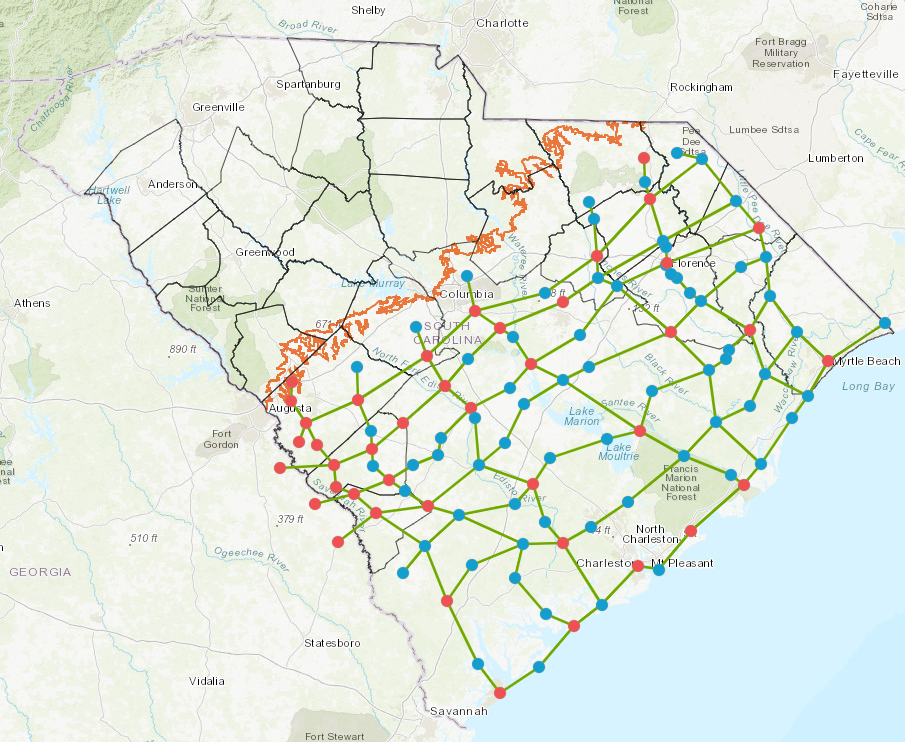 Core samples from a core hole near the Town of McBee.

Fourteen hydrogeologic cross sections were constructed using 42 cores and 68 water wells. The sections depict the distribution, thickness, and continuity of aquifers and confining units of the South Carolina Coastal Plain. Seven of the sections (A, B, C, D, E, F, and F2) are drawn along stratigraphic dip and traverse the Coastal Plain in a northwest–southeast direction; seven (G, G2, H, I, J, K, and L) are drawn along stratigraphic strike and traverse the Coastal Plain in a southwest–northeast direction. All sections are referenced to mean sea level. Depth below land surface and depth relative to sea level are indicated for each well. One inch on the vertical scale is equivalent to 200 feet of borehole. Distances between core holes and wells are provided along the top of each section. Confining units are shaded gray, aquifers white, and bedrock pink. A graphic lithologic column is provided for the core holes and for a few select water wells that had detailed geologic logs made from drill cuttings. A key to the lithologic units is provided on each section. Geophysical logs are included for each core hole and well that include an overlay of the gamma-ray and spontaneous potential logs positioned left of the depth column, and an overlay of the single-point resistance, short-normal resistivity, and long-normal resistivity logs positioned to the right of the depth column. Some geophysical logs were not available for a few of the core holes and wells and thus were excluded from the section. Many of the downdip core holes and wells did not reach bedrock. In those cases, depth to bedrock was estimated and aquifers and confining units were projected down to bedrock. Descriptions of each water well and core hole used to create the sections are provided.

A spreadsheet showing the thickness of each aquifer and confining unit and the depth and elevation to the top and bottom of each unit is provided. Numbers in italic were estimated.

A well log for each core hole and water well are provided. Each sheet contains geophysical logs, depth and elevation, lithology (where available), screen settings, and the aquifer and confining units.