In South Carolina, 20% of the population lives in coastal areas and depends on groundwater for domestic, municipal, or agricultural purposes. Overpumping of groundwater creates localized cones of depression which disrupt natural groundwater flow and allow saltwater to move into aquifers along the coast. Saltwater intrusion has become a problem for some coastal areas in the State that depend on groundwater, particularly at Hilton Head Island, where many wells can no longer be used because of saltwater in the Upper Floridan aquifer.

Saltwater intrusion occurs when high concentrations of total dissolved solids (specifically chloride) in dense seawater move into less dense freshwater. The seaward limit of freshwater in an aquifer is controlled by several factors including hydrogeologic setting, the amount freshwater flowing through the aquifer, proximity to tidally influenced saline water bodies, and the relative densities of fresh and saltwater. The location of the freshwater-saltwater boundary is also affected by local groundwater pumping and the direction of regional groundwater flow.

The SCDNR Hydrology Section manages a network of 11 coastal monitoring wells to measure and track salinity intrusion. Wells are primary open to the uppermost confined aquifer and are equipped with water-level, temperature, and conductivity sensors that record data on an hourly basis. Using specific conductivity as a surrogate for chloride concentration, data are recorded and analyzed to estimate the landward location of the freshwater-saltwater transition zone.

Documentation of the freshwater-saltwater interface provides guidance for water managers and decision-makers to implement sustainable groundwater management strategies to ensure the availability of this important resource in the future. 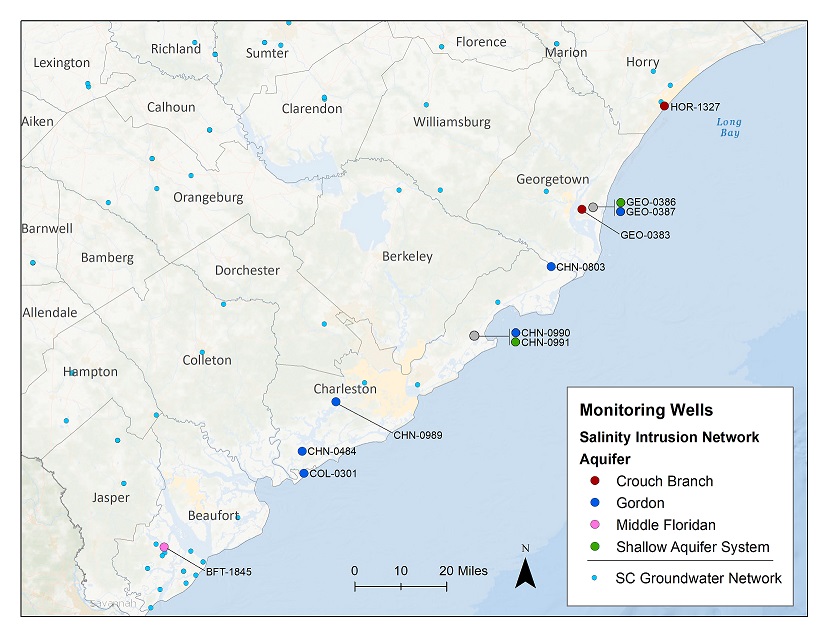